What’s happening this half term?

During this half term we will be looking at two books. ‘The Lost Thing’ by Shaun Tan and ‘Wolves in the Wall’ by Neil Gaiman. We will be completing a range of writing around both of these books starting with ‘The Lost Thing’.

In Maths we will be completing our work from before half term on statistics. We will then be moving on to look at multiplication and division, especially multiplying and dividing by 10, 100 and 1000. After this we move on to look at calculating perimeter and area of shapes.

We will be studying the question Who are the Anglo-Saxons? During these lessons, pupils will complete a range of learning tasks finding out about the lives, religions and battles of Anglo-Saxons.

We will be studying the question ‘Where in the Universe are we?’. During this unit, pupils will be learning about and conducting investigations linked to the planets and space.

Children will be doing gymnastics this half term. Looking at balances and how to move between them in intresting ways. 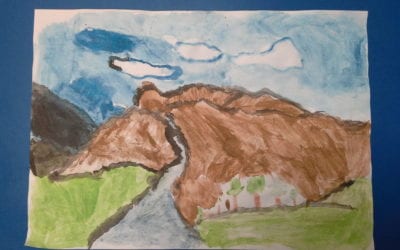 In Year 5 we have been learning how to use watercolours. This has culminated in some fantastic paintings which show depth and a range of painting techniques!